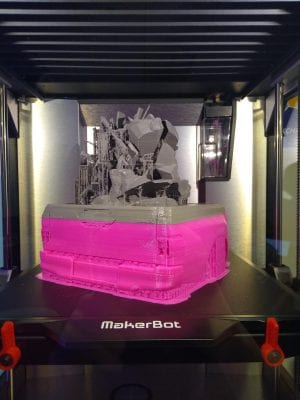 Art as we know it is changing everyday. With 3D printing, sculptures can now be designed and created to result in a prototype or final work. Prototypes are useful as they allow a sculpture to be seen in different contexts without fully committing to one design.

This art piece, titled “Disarmament”, was designed by Alejandro De La Guerra who is an Artist from Nicaragua. Alejandro is an Artist Protection Fund Fellow in residence at the University of Connecticut, avoiding a dangerous dictatorship going on in his home country. The piece calls for the removal of guns and calls for peace as it showcases a pile of guns collectively placed in a car trunk. Alejandro had the following to say about the work:

“According to The National Shooting Sports Foundation (NSSF), the gun manufacturing industry broke records last year with 21 million in gun sales in the United States. The state of Connecticut has historically been a center of gun and ammunition production, so much so that it came to be called the ‘arsenal of democracy.’

Every year, about 40,000 people die in the United States due to the use of firearms in mass shootings, domestic violence, suicides, and accidents, not including the excessive use of lethal weapons in police violence against civilians. As part of President Biden’s policy, it is intended to end the epidemic of gun violence: https://joebiden.com/gunsafety/

To achieve this goal, not only the federal government has to put an effort towards the disarmament, but also institutions, local communities and NGOs. Most importantly, however, personal willingness of individuals to make a paradigm shift in a society where the culture of weapons is so entrenched is needed. In that regard, it is important to raise awareness among people to dispose of weapons with various creative strategies.

In my home country, Nicaragua, 400 deaths and thousands of peaceful anti-government protestors have already been hurt during the current violence caused by unofficial armed ‘paramilitary’ groups in favor of President Ortega. This situation has been a thermometer to measure the danger of access to weapons in the hands of civilians, which provides us with a critical panorama for finding parallels with other countries.

Historically, there have been disarmament and pacification processes in post-conflict countries such as Africa, Europe, Latin America, and Central America with the support of the OAS , the United Nations, and the will of the countries in crisis. If we go back in the compass of time: the civil war in Nicaragua between the Contras and the Sandinistas (1979-1990) cost the lives of more than 50,000 Nicaraguan citizens. The pacification and disarmament process involved several years of negotiation, the main agreement being that the Contras would lay down their arms in exchange for democratic elections in 1990. In the elections of that year, the Sandinistas lost, and in a public and televised ceremony on June 27, 1990, the newly elected president Violeta Barrios De Chamorro received from the Contras the weapons used in the war, with the objective of destroying them in order to erect a monument to Peace.

The scene with all the weapons collected and thrown into a gigantic bonfire was engraved in the collective memory of Nicaraguans. That act symbolized the ‘end of the war’.”

When Alejandro came to Innovate, he already had a 3D model of the print so it was up to us to figure out how to print it. The file itself was gigantic–nearly 1 GB which is much larger than what we usually process. When we tried loading it onto our computers, it would take minutes to fully load and would even crash the 3D printing software. Eventually, we were able to load it, but then came the next big issue. The print time for each model was around 180 hours, or approximately 7 days! We were printing them at full size (20x17x14 cm) so not only was it our longest print time ever, but it’s our largest print too. The duration of the print raises issues because the 3D printing extruder can jam at any time we are not present, halting the process or even resulting in us having to restart the print. This happened about twice halfway through one of the prints, resulting in a week delay. In the end, we managed to print one version and then a miniature version. By shrinking the print, the duration was reduced, however the model became harder to clean up and refine. 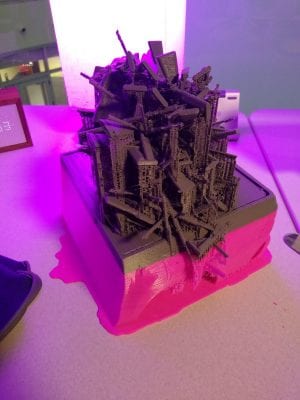 Overall, this project highlighted the utility of innovative tech in the field of fine arts. The usage of 3d printing helped outline how a sculpture may appear in different spaces without first having to fully create it. Both of the final models will help serve as a reference for Alejandro as he works with UConn’s Human Rights Institute to create a much larger monument. Additionally, all the scrap filament is being reused by him to create even more art. Thanks to the Artist Protection Fund (APF), El Instituto, Human Rights Institute, and the School of Fine Arts of UConn. You can keep up with Alejandro’s works on his website here. Be sure to be on the lookout for that as well as more projects from us in the future!