When the pandemic hit, we all were affected in different ways.  Students who remained on campus were forced into a more isolated existence.  Preschoolers at the Child Development Lab were temporarily kept from learning together.  And yet, green shoots emerge from this period of isolation.  The Grow2Give program is an example of that.

Preschool students benefit from exposure to plants and the growth cycle.  Sustainable education for pre-school children can also teach empathy via care for plants.  Studies have shown that care for plants can increase mental health and well-being.

Inspired by the sustainability curriculum, “Nature Explore” offered by the Child Development Lab, Jon Moore, coordinator of OPIM Innovate, envisioned the Grow2Give program as a means to bring people together.  Our “littlest Huskies” would grow plants to be given away as gifts to undergraduate students, and ideally, we all could learn about how caring for plants could benefit our mental health. 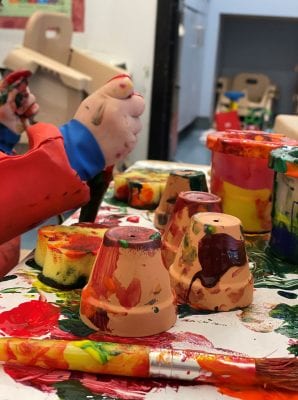 Once supplies were dropped off, the teachers at the CDL got the process started by helping the children individually paint the 2” pots that would hold each plant. Although a fun activity, the importance of creating empathy and the idea that the children were making these to give to others was focused on.

Meanwhile, advice on what to grow came from students in the Horticulture Club. Since many students have cats in the dorm (or at home) an

d because of its fast growing nature, we chose “catgrass” as one of the plants, but also picked lemongrass and a variety of mints for the first planting.  Rosemary and lavender were also added to the list but with the knowledge that these had a much longer growing period. 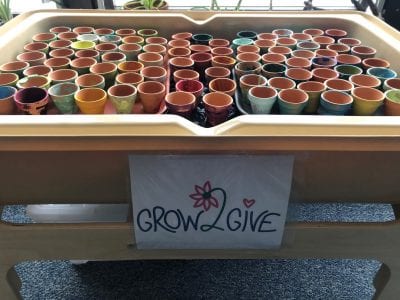 With pots painted and seed, soil, and grow stations set up, again led by their teachers, the kids were ready to plant. Under the leadership of head teachers Debbie Muro and Kelly Aston, (most) of the plants germinated and have been growing just in time for distribution. Although this Spring was the first pilot for the logistic side of the project, we plan to continue creating a network of stakeholders who want to see 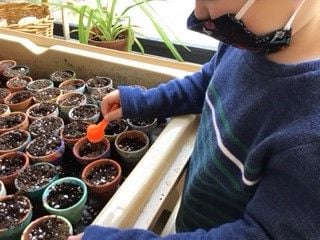 this project grow. In the past few months, Jon Moore has been meeting with other groups at the the University to coordinate distribution and hopefully, to enable the study and documentation of the beneficial effects on mental health that can be achieved by caring for plants.  Colleen Atkinson and Karen McComb from Student Health and Wellness have been involved, along with Melissa Bray and Emily Winter from the Ed Psych department.  Amy Crim from Residential Life Education has offered ideas on how we might distribute the plants that are currently being grown. 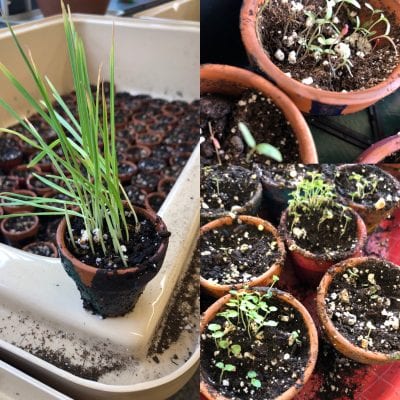 As Spring arrives, our plants are coming soon to a dorm near you!  If you receive a plant and want some tips on your specific plants care, check out the embedded links below.  If you would like to know more about the program or would like to be involved, please contact Jon Moore at the OPIM Innovate Lab to learn more. – jonathan.a.moore@uconn.edu 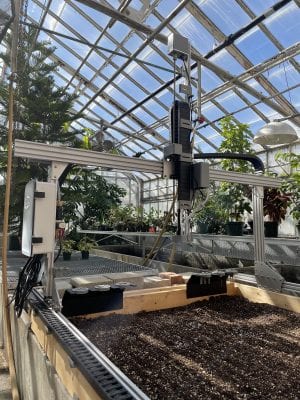 Over the past year, we have been presented with a unique set of challenges. Living, and working, from home has been a challenge for us all, but it has most effectively stunted research projects. However, this was the perfect opportunity to test a machine meant for such a scenario. Farmbot gives us a sneak peek into the future of farming; fully automated and sustainable. These are imperative steps towards increasing the availability of fresh produce, cutting the effects of climate change, plastic packaging, pesticide use, and carbon emissions that continue to pollute the earth and the food we eat. Even though setting up FarmBot itself proved an arduous task, the final result provides a sustainable farming method allowing for the automated data collection and maintenance of plants.

FarmBot is an autonomous open-source computer numerical control (CNC) farming robot that prioritizes sustainability and optimizes modern farming techniques. Using computer numerical control, FarmBot can accurately and repeatedly conduct experiments with no human input and therefore, very little error. We can write sequences, plan regimens and events to collect data 24/7 in addition to monitoring the system remotely. This allows us to plan as many plants, crops, inputs, and operations as needed. Reducing cost and increasing sustainable farming is a priority of FarmBot. 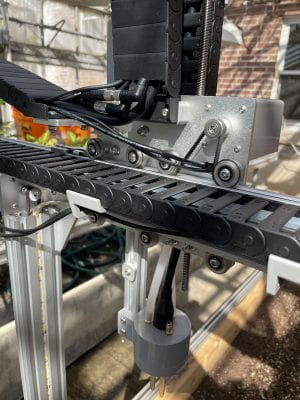 The FarmBot Genesis features a gantry mounted on tracks attached to the sides of a raised garden bed. The tracks create a great level of precision because the garden bed is represented as a grid in which plant locations and tools can have specific coordinates, therefore allowing endless customization of your garden. The gantry bridges both sides of the track and uses a belt and pulley drive system and V-wheels to move along the X-axis (the tracks) and the Y-axis (the gantry). The cross-slide that controls the Y-axis also utilizes a leadscrew to move the Z-axis extrusion, allowing for up and down movement as well.

Movement is powered by four NEMA 17 stepper motors including rotary encoders to monitor relative motion. The rotary encoders are monitored by a dedicated processor in the custom Farmduino electronics board, which utilizes a Raspberry Pi 3 as the “brain”. The Farmduino v1.5 system has several useful features including built-in stall detection for the motors. Stainless steel and aluminum hardware makes the machine resistant to corrosion, making this system safe for long-term use outdoors. 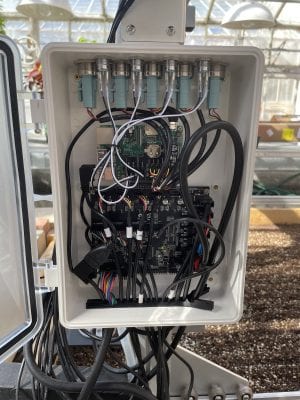 The FarmBot Genesis model also includes several tools made of UV-resistant ABS plastic that are interchanged using the Universal Tool Mount (UTM) on the Z-axis extrusion. The UTM utilizes 12 electrical connections, three liquid/gas lines, and magnetic coupling to mount and change tools with ease, allowing for automation at nearly every step of the planting and growing process. Sowing seeds without any human intervention is possible with the vacuum-powered seed injector tool, which is compatible with three different-sized needles to accommodate seeds of varying sizes. Once planting has been completed, regimens can be set up to water plants on a schedule using the watering nozzle. The attachment is coupled with a solenoid valve to control the flow of water, ensuring that each plant receives as much moisture as they need. The soil sensor tool takes the automation of watering a step further by detecting the moisture of the soil and using the collected data to modify the amount of water dispensed as needed. A customizable weeding tool uses spikes to push young weeds into the soil before they become an issue. FarmBot uses a built-in waterproof camera to detect weeds and take photos of plants to track growth. All of these tools and features create a completely customizable farming experience without the worry of human error. 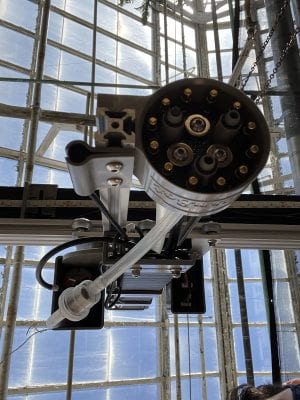 FarmBot operates using a 100% open-source operating system and web app. In the web app, we can easily control, configure, create customizable sequences and routines all with a drag-and-drop farm designer and block code format. From here we are able to receive all information regarding the positioning, tools, and plants within the garden bed. FarmBot’s Raspberry Pi uses FarmBot OS to communicate and stay synchronized with the web app allowing it to download and execute scheduled events, be controlled in real-time, and upload logs and sensor data.

We faced many ups and downs during the hardware and software phases of FarmBot. From vague reference docs, manufacturing defects, hardware failures, and network security problems, this was an in-depth and at times very frustrating project. However, we didn’t want an easy project. The challenges we faced when building FarmBot, as annoying it was to debug at the time, helped us gain a great understanding of how this machine works. Through all the blood, sweat, and tears (literally), we learned more from this project than we ever could have imagined. From woodworking to circuity to programming and botany, we tackled a wide range of issues. But that’s what made this project so worth it. Many times we had to resort to out-of-the-box thinking to resolve issues with some of the limited components we had. Working as a team also allowed us to bounce ideas off one another while each bringing our own unique talents to the team. Nicolas has a background in Computer Science which helped with programming FarmBot as well as resolving software and networking issues that occurred. Hannah’s major is Biological Sciences and she has experience with gardening, which helped in the plant science aspect of the project on top of overall planning and construction. As an electrical engineering major, Nicholas helped with the building process, wiring and his input was critical in resolving issues of such an advanced electromechanical system. While we recognize FarmBot’s shortcomings, it was an incredible learning experience and an imperative building block towards a more sustainable and eco-friendly future.

Moving forward, we plan on modifying FarmBot to include a webcam, rain barrel, and solar panels. A webcam will give us a live feed of the FarmBot to allow live remote monitoring as well as enable us to take photos for timelapse photography. Rain barrels can be used to collect rainwater which can be recycled and act as FarmBots water source, further increasing its sustainability. Solar panels will provide a dedicated, off-grid solar energy system helping further reduce the cost and carbon emissions associated with running FarmBot. We also currently have an MIS capstone team developing ways to pull real-time data for future analysis and dataset usage in other academic settings.

Be on the lookout for future FarmBot updates and be free to reach out to opiminnovate@uconn.edu for more information.