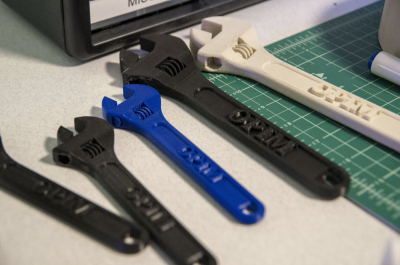 One of the most used features of the OPIM Innovate lab is the Fused Deposition Modeling (FDM) 3D printer. We are always interested in new innovations in 3D printing and what students like to use the 3D printers for. We were lucky to have a chance to show a big name company upcoming technologies we had in the space.

Stanley Black & Decker’s executive personnel came to UConn for a networking event with the OPIM department. I had been tasked with 3D printing a momento to give to the Stanley team. As a manufacturer of tools and hardware, I thought it would be appropriate to print some kind of tool for them to take back with them. Doing some research I had discovered a functional wrench model that we could print as one piece.

Once I printed them I found that they were not always functional. I modified the wrench features and diameters to get what you see below using Tinkercad and Makerbot Desktop. Over the course of several weeks I experimented with several wrench sizes and materials. Our main criteria to improve the design was to reduce print time and while ensuring they were still functional. I found that wrenches that were made of ABS and approximately the size of the blue wrench seen below was the best design.When I decided to reprint, I decided to brand them in order to make them more personal.

In the end the Stanley team was intrigued by what we were doing with the space and the 3D printing technologies I had shown. It was a good professional experience to speak with them and present what I had learned during my academic career.