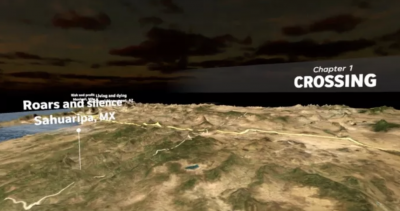 Virtual Reality is a new set of technologies that has the ability to accomplish educational, business, and recreational feats never seen before. If you would have told somebody 50 years ago that they could climb and explore Mount Everest from the safety and comfort of their living room, they would not have believed it. As Mark Zuckerberg once said, “Virtual reality was once the dream of science fiction, but the internet was also once a dream, and so were computers and smartphones. The future is coming and we have a chance to build it together.” In OPIM Innovate, I recently had the opportunity to explore this past dream of science fiction with a Latino and Latin American Studies class: LLAS3998 – Human Rights on the US/Mexican Border: Narratives of Immigration.

The Lab was coordinated by Anne Gebelein, a UConn professor who wanted to expose her class to narratives in public policy including the United States border, immigration, and other Latin American topics. Gebelein had realized that the usage of a new educational medium like Virtual Reality could allow her class a broader and much more meaningful experience while learning these challenging topics. In working with the Innovate team, I was able to construct a curriculum containing learning materials for a specially designed VR workshop: Creating Empathy for Human Rights. We made use of the HTC Vive virtual reality system as well as a set of Google Cardboards to facilitate this event.

One of the experiences showcased was a virtual reality environment created by USA Today known as The Wall. This Vive-only application allowed students to explore various parts of the USA-Mexico border wall as it currently exists today. The vast size and land area covered by the border certainly surprised many students. In further exploring the topic of human rights, students also investigated a solitary confinement VR experience that placed them in the shoes of an immigration detainee. Several students commented on the gravity and sheer discomfort they felt when they entered this environment.

Overall, VR has certainly begun to prove itself a viable technology for a new style of practical teaching and learning. Throughout the course of this workshop, the LLAS class and Professor Gebelein were exposed to environments that they never could have entered through traditional teaching methods. I was very pleased that this workshop became a resounding success and we hope to further develop our materials and assist with more activities like this in the future.